A tattoo is a form of body modification, made by inserting indelible ink into the dermis layer of the skin to change the pigment. The first written reference to the word, "tattoo" (or Samoan "Tatau") appears in the journal of Joseph Banks, the naturalist aboard Captain Cook’s ship the HMS Endeavour: "I shall now mention the way they mark themselves indelibly, each of them is so marked by their humor or disposition".

Tattooing has been practiced for centuries in many cultures spread throughout the world. The Ainu, an indigenous people of Japan, traditionally had facial tattoos. Today, one can find Berbers of Tamazgha (North Africa), Māori of New Zealand, Hausa people of Northern Nigeria, Arabic people in East-Turkey and Atayal of Taiwan with facial tattoos. Tattooing was widespread among Polynesians and among certain tribal groups in Taiwan, Philippines, Borneo, Mentawai Islands, Africa, North America, South America, Mesoamerica, Europe, Japan, Cambodia, New Zealand and Micronesia. Indeed, the island of Great Britain takes its name from tattooing, with Britons translating as ‘people of the designs’ and the Picts, who originally inhabited the northern part of Britain, which literally means ‘the painted people’. British people remain the most tattooed in Europe. Despite some taboos surrounding tattooing, the art continues to be popular in many parts of the world.
By Neil. Moralee on 2012-06-28 11:42:56 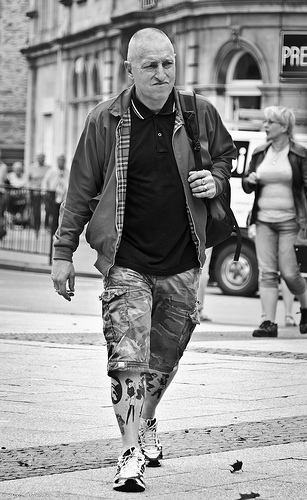